/ Articles / Underrated Bands of Rock – The Overlooked and the Unappreciated

Underrated Bands of Rock – The Overlooked and the Unappreciated 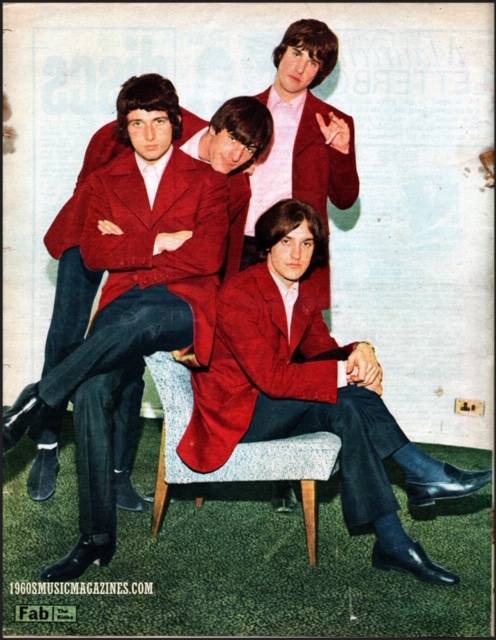 What makes one rock band achieve legendary status and another become obscure or forgotten? Sometimes, it is timing, luck, lack of promotion or infighting. Here are five incredibly talented rock bands that never realized their full potential…

The band known as The Kinks can be counted among phase one of the British Invasion of rock and roll during the 1960s. They had a fabulous repertoire of catchy, original hit songs, such as “You Really Got Me,” “All day and All Night” and many more. However, what led to this band being overlooked can be attributed largely to timing. They wound up being completely overshadowed by superstar groups such as, The Beatles, The Rolling Stones and The Who. These three bands were the most commercially successful and popular bands to come out of the British Invasion.

However, the band’s former front man, Ray Davies has received numerous awards for his career as a musician. Some of the most notable are the BMI Icon Award, for his “enduring influence on generations of music makers.” Also, Davies was inducted into the American Songwriters Hall of Fame in 2014. Joan Jett and the early punk band, The Clash have both listed The Kinks as a major influence on their sound. 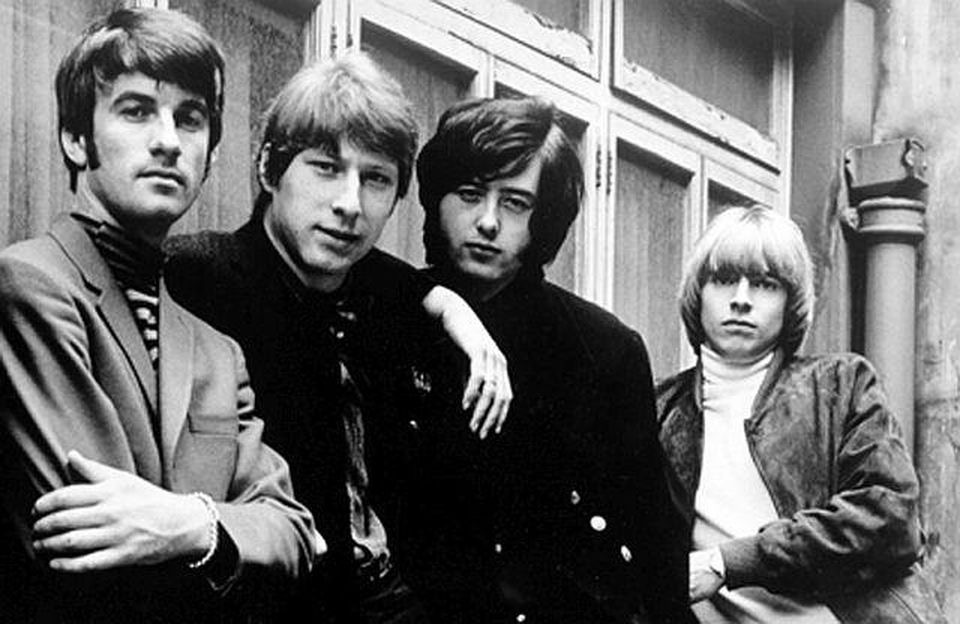 If there was EVER any band in the history of rock and roll that should not have been overlooked, it would be The Yardbirds… During the band’s existence, they had three pedigree guitar players. Those of course are Eric Clapton, Jimmy Page and Jeff Beck. Young Eric Clapton was only 18 years old when he joined the band.These three musicians are considered to be some of the very best guitar players in the world. It should be noted that Keith Reif was also a very underrated harmonica player.

The band formed in 1963. They enjoyed hits with blues cover songs such as, “For Your Love,” “I’m a Man” and “Train Kept A Rollin.” Ironically Eric Clapton would leave the band because the band was becoming too commercial. So, it was not because of their music that this band failed to launch into superstardom.

In an interview in 2015, bassist Chris Dreja talks about what it was like to play in a band with three incredible guitar players.“It was Eric first, he was still learning the trade, a beginner. Jeff was different, he seemed to be able to play without really practicing. And Jimmy was different because he was from the session side. He was used to doing what people wanted in the best way possible. He did just that – played what we wanted. He was precise and very businesslike…”

It was more a case that the band would ultimately function as a stepping stone for most of the band members. The group would also go on to help create new genres in rock and roll, such as psychedelic rock. Jimmy Page would of course go on to become the lead guitarist for the legendary super rock group, Led Zeppelin.

Eric Clapton would go on to form psychadelic blues rock band, Cream, Blind Faith, Derek and The Dominos and also enjoyed a very successful solo career. This band’s ultimate legacy is that they have served as inspiration for sensational classic rock bands like, Aerosmith and countless others. They left their mark in musical experimentation and innovative new ways to create guitar driven blues rock.

Death of Ketit Reif: On May 14, 1976, at 33 years of age, Keith Reif was found dead in the basement of his home, right next to his guitar and amp. The coroner determined that the cause of Reif’s death was electrocution from a guitar he was playing that was not properly grounded. Reif most likely wound have survived being electrocuted, if it were not for the acute asthma that he was afflicted with. It made his immune system highly fragile… 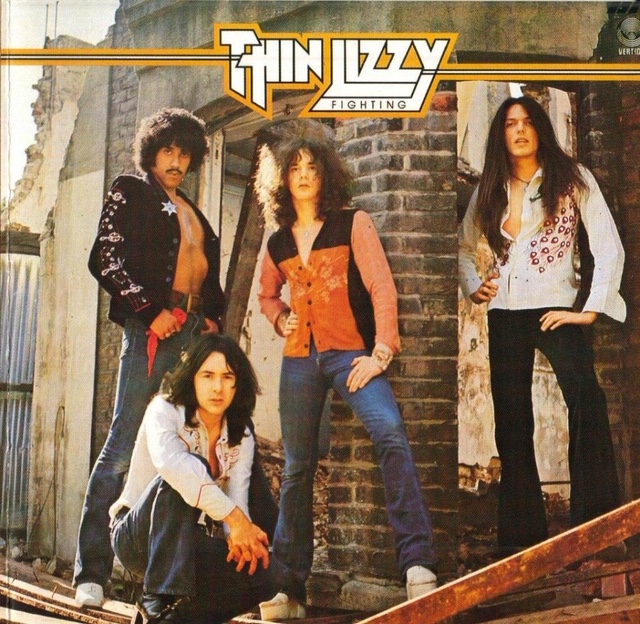 This band had loud, dueling lead guitars, a hip, Americanized sound and a highly charismatic leading vocalist. They were the Dubliners, who would inspire their fellow rockers and countrymen, U2. Of course, we are taking about the classic, hard rocking band, Thin Lizzy. If you have ever heard this band’s song, “The Boys Are Back Town.” then you know that it’s a song that easily gets replayed over and over in your head. It was the bands signature song and went #1 in Ireland as well as the USA. So what happened? Why don’t we automatically think of these guys, when we are thinking about the greatest rock bands of all time?

If you take a look at the electrifying live performance by the band below, you can see that Phil Lynott with his clever, lyrical enunciations and glances has the audience hanging on his every word. They were absolutely dynamite in a bottle live and so tight! However, one reason they did not ultimately realize superstardom status was incredibly due to lack of exposure.

The band had to address the infighting and egos clashing within the group, which led to personnel changes. It also did not help that the sometimes fought with bands that they were touring with such as Slade. These issues took time to resolve and it was necessary to find new members and get them up to speed with the band’s growing music catalog. It meant that they were not touring and promoting themselves when “The Boys Are Back In Town” peaked.

The second reason is health issues, which were mainly caused by excessive drug use. So much so that the band failed to complete a full, major USA tour. This would have allowed the band to obtain a larger fan base. We forget that back in the ’70’s, there was no live streaming or social media tools like bands have access to today. It took time to build a large fan base and going on tour was absolutely essential for bands back in the day. You had to earn your dues, out on the road…

Tragically, Phil Lynott wound up dying as a result of severe pneumonia in 1986. His condition got so severe, he wound up being in a coma that he never came out of. This was the result of acute exhaustion and a drug overdose. Although Thin Lizzy has yet to be inducted to the rock and roll hall of fame, it did not stop Ireland from honoring one of their favorite sons.

A statue of Phil Lynott can be found right outside the world famous live music bar, Bruxelles in the heart of Dublin. The statue was created by artist, Paul Daly. Phil Lynott’s mother, Philomenia Lynott was powerful and proud of her black Irish heritage. She campaigned relentlessly until a trust was created for the statues creation. The Roisin Dubh Trust is in traditional Gaelic. It stands for “Black Rose.” The statue was unveiled in a huge ceremony in 2005. 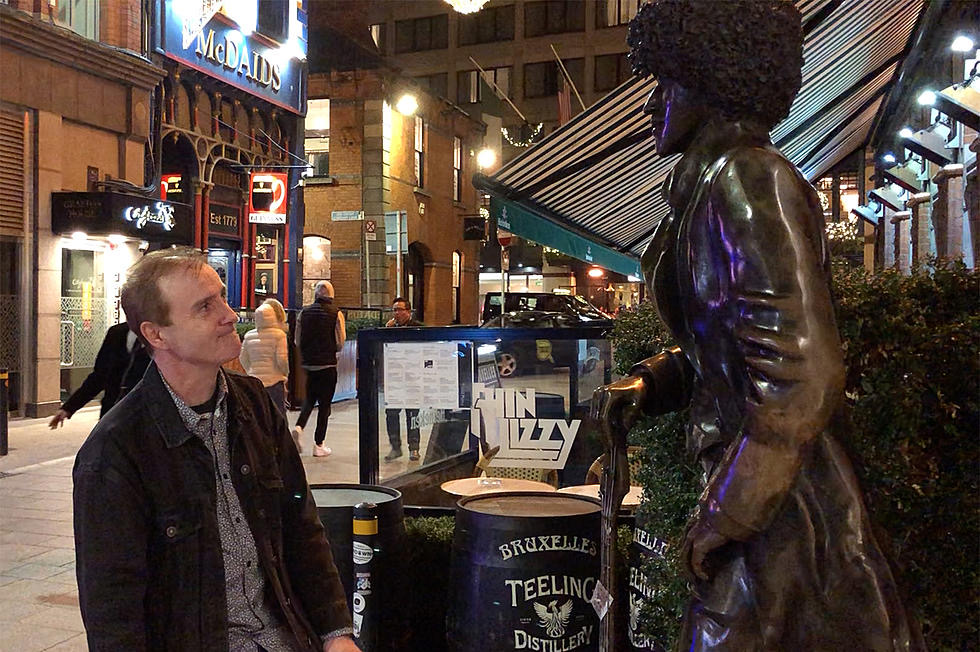 Artist and sculpture, Paul Day gazing up at his highly accurate and magnificent statue of Phil Lynott in Dublin, Ireland. Lynott stood at 6’1″ in height, so it must be a powerful piece of artwork to behold. 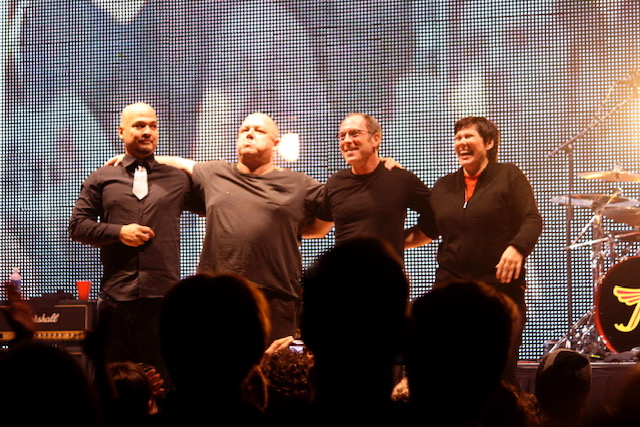 In a candid interview, right before his suicide, Kurt Cobain admitted that he stole the riff of his signature song, “Smells like Teen Spirit” from a song that the surf – punk rock band, The Pixies had written. However, he never said exactly which one it was.

Cobain and his band, Nirvana became essentially The Beatles of grunge. If this band had so much influence on basically every Indie rock and surf / garage  band on the planet, then why are they not as known to the masses, like they should be? When Cobain talked about writing “Smells like Teen Spirit,” he said this.

“I was trying to write the ultimate pop song. I was basically trying to rip off The Pixies. I have to admit it.When I heard The Pixies for the first time, I connected with the band so heavily, I should have been in that band – or at least a Pixies cover band..”

Lack of adequate Promotion: Most critics agree, when it comes to The Pixies and their discography, “Surfer Rosa” is the best album that they made. But, incredibly not a lot of people know about it. Most fans are more familiar with the band’s album “Dolittle.” It’s almost laughable. How can that be???? One way for sure is that The Pixies never had a premium  management or promotional team to help them market their material and get it on the airwaves.

Infighting: The tension between frontman, Black Francis and bass player and backing vocalist Kim Deal was intense… Deal had a desire to co -write more material in the group. Black Franis refused to grant her that wish. Frustrations and conflict became such a problem that Francis threw a guitar at her during a live show in Stuttgart, Germany. Kim Deal went on to form a solo project known as The Breeders and many other creative projects.

In 2013, after coming and going for many years, Deal finally decided to retire from the band for good. As I mentioned above there’s absolutely no telling how many musicians decided to pick up a bass, a guitar, or buy a drum kit after hearing an album by The Pixies.Their importance in the evolutionary process of rock and roll has yet to be realized or understood… 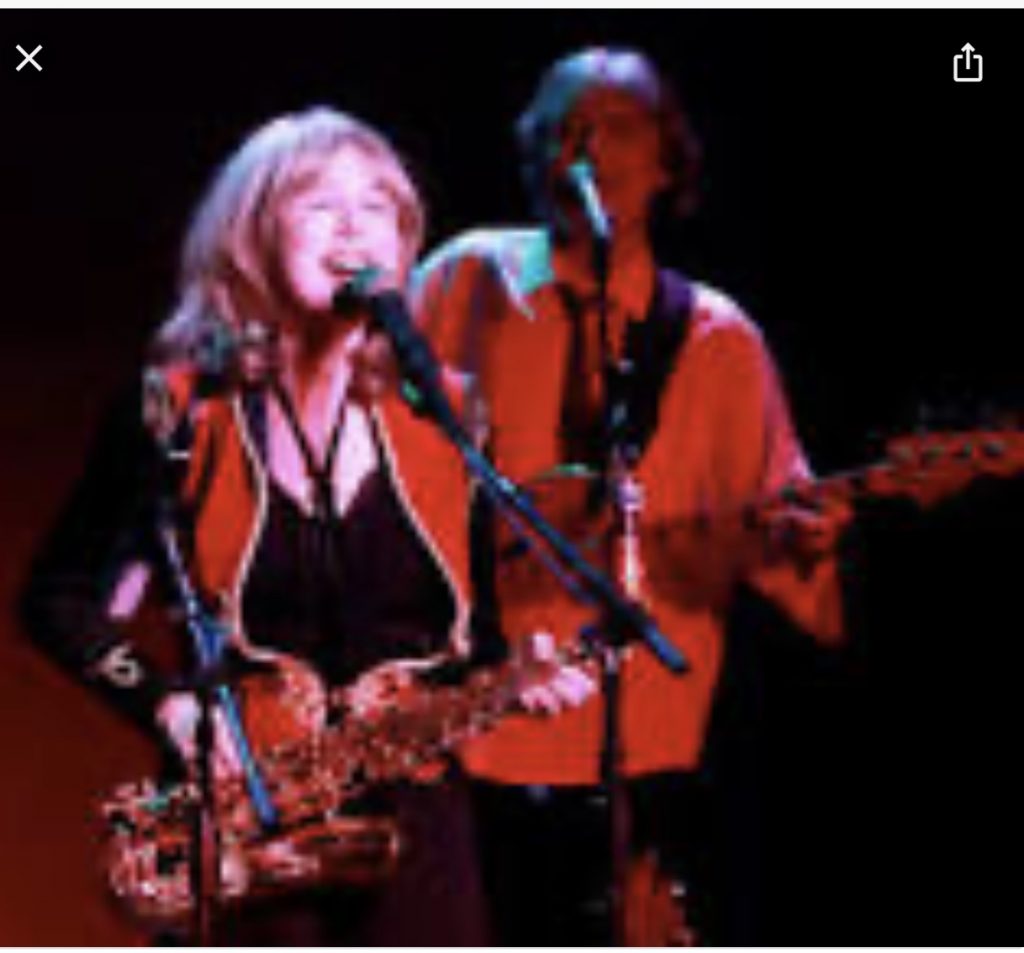 This is perhaps one of the sweetest stories ever, within the genre of rock and roll. The group Quarterflash was formed in 1980. The founding members Rindy Ross and her husband and creative partner, Marv Ross met while they were both teaching at an elementary school. They quickly married and formed a dance band, Seafood Mamma as a way to have a little fun in between preparing lessons. Rindy Ross in addition to having a voice comparable to Pat Benatar is also a phenomenal saxophone player. you can hear her saxophone part in between verses in “Harden my Heart.” It’s a catchy hook.

Marv Ross focused on creating the songs and was the band’s chief guitarist. In 1981, the duo created a great hit, which became their signature song, “Harden My Heart.” This song caught the attention of David Geffen and he immediately signed the act to his label, Geffen Records. Geffen created the label in 1980, so he was looking for groups to sign to the label.Marv and Rindy changed the group’s name to Quarterflash and studio musicians were hired for touring and recording.

“Harden My Heart” immediately became the number one hit in 1981 and earned the band a certified, million dollar gold record award. It was released on the band’s debut album, “Quarterflash,” which became a certified platinum album.

For this band, timing turned out to be both a blessing and a curse… If you go into just about any bar in the USA, people select “Harden My Heart” on the jukebox, while they are drinking, mingling and shooting pool. The band was successful in creating a truly timeless hit.

However, Geffen Records suddenly dropped the band in 1984, when the genre of New Wave rock in the ’80’s kicked off… That has not stopped the band though from playing and entertaining their loyal fan base. Marv Ross has also become a successful soundtrack writer for several films. Rindy and Marv are still married and doing what they love. If you’ve ever played in a band, where two of the members are married, you realize just how amazing that truly is!

These are just five underrated bands of rock and roll. Of course, this list is ultimately subjective…. There are many, many more rock groups out there that try as they might, just never became a household name.