/ Featured / “The Dirt” – The Mötley Crüe Story on Film

“The Dirt” – The Mötley Crüe Story on Film 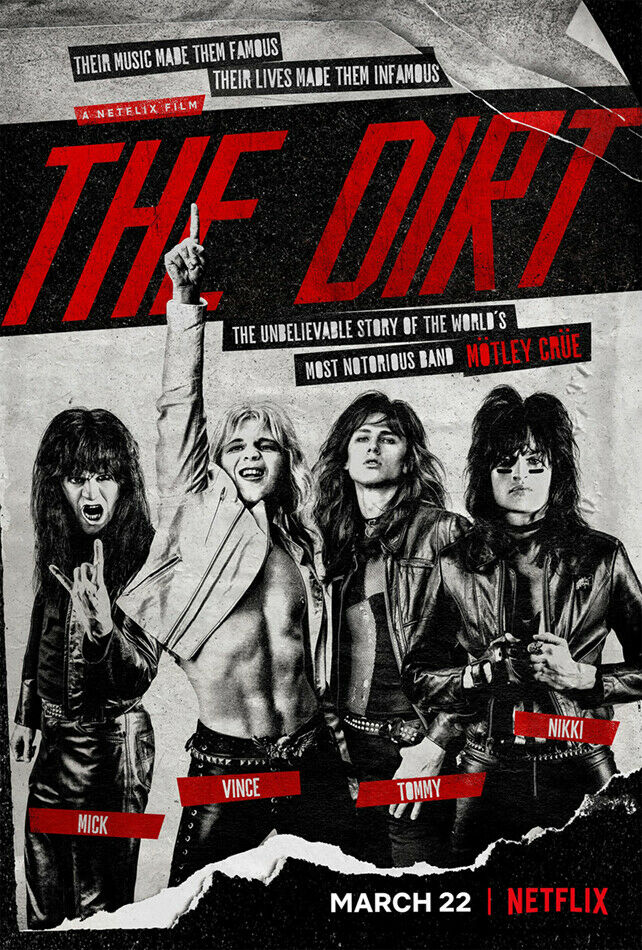 In 2017, Netflix bought the rights to the rock-n-roll biopic “The Dirt,” directed by Jeff Tremaine and the screen play written by Rich Wilkes. The movie is based on the collaborative book, The Dirt: Confessions of the World’s Most Notorious Rock Band by Vince Neil, Mick Mars, Tommy Lee and Nikki Sixx, who became forever known as Motley Crue.

The band worked with writer Nick Strauss of the New York Times to tell their story of just how Motley Crue came together,  fired up their instruments and in absolute wild and reckless abandon went on to became favorites at the world famous Whiskey A Go – Go in LA, “the strip” and ultimately the world….

At the beginning, the audience gets transported back in time to Southern California in the early1980’s. We get introduced to a young boy named Frank Carlton Feranna Jr. He is abused by biological father, who winds up deserting the family. The young man endures abuse from the revolving men that come and go out of his mother’s life. Feranna’s mother was also tremendously emotionally abusive towards her son. Ultimately, young Feranna decided to take his chances by running away to Hollywood and eventually finding his way to the sunset strip in LA at the age of eleven. Feranna legally changes his name to Nikki Sixx, (Douglas Booth.) Conversely, we are shown the happy, stable, loving family of Tommy Lee, (Machine Gun Kelly.) His whole family is extremely supportive of Tommy and his musical interests.

The audience gets to sit in on the audition of Mick Mars, (Iwan Rheon,) we he gets the gig as the band’s guitar player. Mars was diagnosed with Ankylosing Spondylitis. A degenerative spinal chord disease that has no cure. Mars unlike his other bandmates who, live a debaucherous lifestyle filled with tons of sex, drugs and rock and roll is a lot older than his bandmates. Mars can usually be found alone in his hotel room laying on a bed with hands across his chest as if he were a corpse after shows or parties.

The early life of Vince Neil is a bit more mysterious. We do not learn anything about Vince Neil’s (Daniel Webber) childhood or upbringing. Nikki, Tommy and Mick immediately recognize that he is on the correct trajectory of climbing to the top as the lead singer of a popular L.A. band. After some convincing from Tommy Lee, who attended high school with Neil, he decides to go to the audition. The biopic places the audience in the rehearsal studio when all four members come together at that transformative moment that they discover they have really got something…

Motley Crue’s early 1983 hit Looks That Kill off of their Shout At The Devil Album.

Something that makes “The Dirt” particularly great in my opinion is that the audience gets to be a fly on the wall for all of the significant events that Motley Crue went through as a band. The biopic reveals how at one particular show the band was discovered by a young and newly promoted Tom Zutaut from Elektra Records. In addition to this, a manager named “Doc,” who represented James Brown and Kiss is immediately drawn to the buzz “Crue” is creating and how they have conquered “the strip.” He becomes their first manager. Costume designer, Christine Wada absolutely nails the bands outfits for both performances and casual dress ware during this particular time in their career.

If you take a look at the film credits you will see that it took an entire team of make up artists to  achieve Motley Crue’s iconic look for their live performances. You see how all the sex, money, fame, drugs, and the pressure gets increasing larger for the group. You watch as Motley Crue goes from being L.A. local favorites to partying with Van Halen frontman, David Lee Roth as well as the legendary Ozzy Osburne. I will not share what happens when Motley Crue hangs out with both of these rockers… The biopic also points out that in stark contrast to the constant need for female companionship and conquest Tommy, Vince and Nikki seek out, Mick Mars leads a very different lifestyle by not being involved with groupies. Mars tells his bandmates, “I happen to have respect for myself and the females of our species. Unlike you animals.”

“Home Sweet Home,” released in 1985 on the album Theatre of Pain.

The biopic also covers the dark and negative things that happen to the band as a result of their triumphant success and how each member tries to cope with the pros and cons of fame.. This includes Nikki Sixx falling under the spell of the ultimate dark temptress heroin…

There are many more tragic events that the biopic covers. I could reveal it all to you in this blog. But, I’m choosing not to do so. You can’t expect me to tell you everything! You just have to watch it to find out what for yourself. This biopic was extremely well made. I recommend it to all rock and roll enthusiasts and lovers of music history!