/ Interviews / Multifaceted nature of a musician as an artist. Interview with Peter Aaron Chrome Cranks.

Multifaceted nature of a musician as an artist. Interview with Peter Aaron Chrome Cranks. 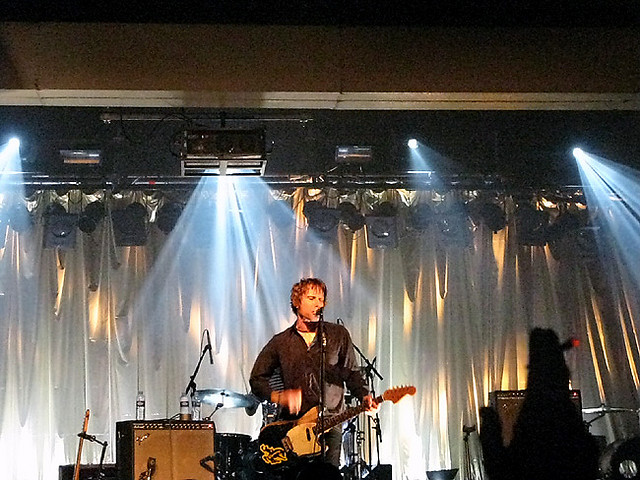 Hi Peter, Thanks a lot for doing this interview with Rock-n-Roll.biz. We wanted to talk about the multi-faceted nature of musician as an artist, but first let me ask you few questions about your high points with the Chrome Cranks.

Rock-n-Roll.biz: What was your favorite gig ever with the Chrome Cranks? Any memorable events that will always stay in your memory?

With the Cranks, I kind of get consumed by the music and generally only remember bits and pieces of gigs at best. That said, I do remember one gig in the upstairs room of a Mexican restaurant in Kalamazoo, Michigan, in 1995 as being particularly fun. The whole place had gone ballistic and I have this mental snapshot of Jerry, our bass player, play-g and clunking some kid who was rolling around on stage with his hollow body bass. Being on a bill with the Cramps, the Laughing Hyenas, and Come at CBGB was very cool. The show at the wonderful Vera Club in Groningen, Holland that got recorded for our Live in Exile double album was definitely one of our best. When we started playing again in 2009, the ones we did in Kingston, New York, and at Glasslands in Brooklyn both felt really good; people were telling us we were better than we were back in the day. And then playing our first European show in 12 years to a few thousand people at the Nuits Sonores festival in France a week later that was pretty incredible.

Rock-n-Roll.biz: Chrome Cranks's video got played on MTV when it was cool? What was it like at that time?

I wouldn’t say that MTV was ever cool. But I guess, at least, that when they played our video for “Hot Blonde Cocktail” in 1997 it did still mostly play music videos (even if it was largely bad music) and not the insipid “reality” shows it’s all about now. But, yeah, that was surreal. They showed it once on “120 Minutes” and then for a while in the afternoons they were showing a sample hour of their “indie” sister network, M2, which was playing our video in heavy rotation—which meant that we were getting shown on prime-time MTV for a bit.

Rock-n-Roll.biz: I have seen your new project / collaboration with Brian Chase from YEAH YEAH YEAHS and for the whole time I couldn’t close my mouth. It was something really raw and primal and yet made sense as a music of the future? What were your motives for starting this project? Is your love for free Jazz a part of the reason?

Thanks, I’m really enjoying it. We’re calling it the Peter Aaron/Brian Chase Duo, which felt weird to me at first but, hey, why not? This project is so much fun. No roadmaps, no nets. Just let it fly and whatever happens just happens. Brian and I first met a couple years ago when we played a gig Upstate as members of Man Forever, the side project of Oneida’s drummer Kid Millions. A few months later, when we were both playing in a six-person, collective improv “noise salon” at Secret Project Robot in Brooklyn, a segment of the set featured us doing a duet, which was amazing. It was obvious that we were totally clicking and had a special rapport, so we decided to do some duo gigs and I booked one at the Half Moon in Hudson. Brian suggested we make a record, which of course I was way into. He came up the morning of the gig and we spent the day recording, did the gig that night, and then went back in the studio in the morning to record some more. It sounds great, really crazy stuff. We’re mastering it and getting together artwork now. Once those things are in place, we’ll solicit some labels. Yeah, we’re both great lovers of free jazz and Brian does play with a lot of people connected to that world. I guess out of respect for that music I’d call my end of it more “free jazz-inspired,” since I have neither the jazz background nor the abilities that go along with it. But like Brian I’m a good listener, which I believe is the most important quality one must have for playing improvised music in a non-solo situation.

Rock-n-Roll.biz: I also know that you are freelance writer for such big publications such as Village Voice, Rock and Roll hall of Fame, All about jazz? Is writing your newly founded passion before music or afterwards?

It feels good to write and it’s gratifying when I and others like what I’ve written, but I’m not so sure I’d call it a passion. The process itself is like exercising; it’s a solitary act, and on some days it flows and feels good and on others it’s slow going and like extracting teeth. But it’s still something that feels natural to me and I’m very comfortable doing, which isn’t the case for many others. I mainly write about music, which is something I definitely am passionate about. Writing is something I’ve doing for as long as I can remember. I read a lot as a kid and consistently did well in school with term papers, did a fanzine when I was in high school, and majored in journalism in college. When the Chrome Cranks fell apart in 1998, I was left trying to figure out what to do next. So I took some refresher courses and started writing again, as well as editing, which brought me into the glorious print media field. Musician and journalist, the two most lucrative occupations in the Internet age—not!

Rock-n-Roll.biz: You also wrote a book about Ramones? I grew up in Forest Hills where Ramones started out and I could tell you I understand the angst and ferociousness of their music to the core. Why did you decide to embark on this project?

I did. Sort of. It’s more of a book about stuff that relates to the Ramones. It’s called If You Like the Ramones… and was published last year by Backbeat Books as part of the If You Like series. I was in negotiations about doing a book for the series—originally I was going to do If You Like Frank Sinatra…, but Backbeat ran into legal problems with the Sinatra estate and took that project off the table—and the idea of a Ramones book came up, so I jumped on it. In keeping with the IYL concept, the aim is to steer new fans toward the artists and other entities (certain movies, cartoons, comic books, TV shows, etc.) that influenced the Ramones, were influenced by the Ramones, or are connected with the Ramones in some way. Obviously it mostly targets neophytes, but I did try to cover some stuff that even long-time fans might not know about.

Rock-n-Roll.biz: How important is it for a musician to get out of the music world and focus his energies elsewhere? Is it for sanity’s sake or mere detachment?

Very. The music world is like the Island of Misfit Toys. It’s a sanctuary for musician-freaks like me, who was never going to fit into the general population. And yet the music world, especially the underground music scene, is a bubble, an alternate reality that we’ve created to escape the inanity of mainstream society. I don’t at all advocate joining the masses, but I do believe it’s healthy to keep things in perspective by venturing outside your comfort zone and challenging yourself at least once in a while. I can’t help but think of all the interesting music, art, ideas, and people I would have missed had I remained stuck in the same New York rock scene I inhabited in the 1990s—which, from what I can tell, continues to be a largely tail-swallowing environment. Not only does trying new things make you grow as a person, but as a musician it makes what you do richer and more interesting.

Rock-n-Roll.biz: Are there any other arts you are dabbling with? Any more books on the horizon?

Right now I’m working another book for Backbeat, The Band FAQ. It’s for their FAQ series, which is more in-depth than the recently discontinued If You Like series. So this one will cover everything connected with the Band and dig more deeply into topics connected with them—the music that influenced the Band and has been influenced by them, but also their history collectively and as individual members; examinations of each of their albums; their time as Ronnie Hawkins’s band, the Hawks; outside figures associated with the group; The Basement Tapes and their years with Bob Dylan; solo albums; their contemporaries and collaborators; their best and worst music; the Toronto and Woodstock scenes they were part of; books; movies; etc., etc. Since I’ve lived in the area that gave birth to Music from Big Pink and The Basement Tapes for over a decade, have covered the local music scene for both the main area newspaper and the arts magazine Chronogram (of which I’ve been the music editor since 2006), and even got to interview Levon Helm, I’m kind of sitting right in the bullseye for this one. I’m also planning an illustrated anthology of the many profiles of Hudson Valley musicians I’ve written over the years, which includes everyone from the Bad Brains to Pete Seeger, Sonny Rollins, Graham Parker, Pauline Oliveros, and others. And of course I’d like to write a memoir, which in addition to my time in the Chrome Cranks and the ’90s Lower East Side scene would cover my participation at the start of the East Coast hardcore scene, my years in the 1980s Boston and Midwest scenes—I was a promoter when I lived in Ohio and booked most of the touring underground bands of the day (Nirvana, Flaming Lips, Pussy Galore, etc.)—and perhaps some of the Hudson Valley stuff.

Rock-n-Roll.biz: Is writing a book similar to playing a guitar?

Writing a book is way harder than playing guitar. With writing, you’re holed up and chipping away, mostly unsure if your words will hit the mark and be received the way you intend until (if) they’re published and readers bother to acknowledge them. Whether you’re playing solo or with others, with playing guitar you have instant gratification. Even for a three-chord hack like me.

Rock-n-Roll.biz: Thank you very much,