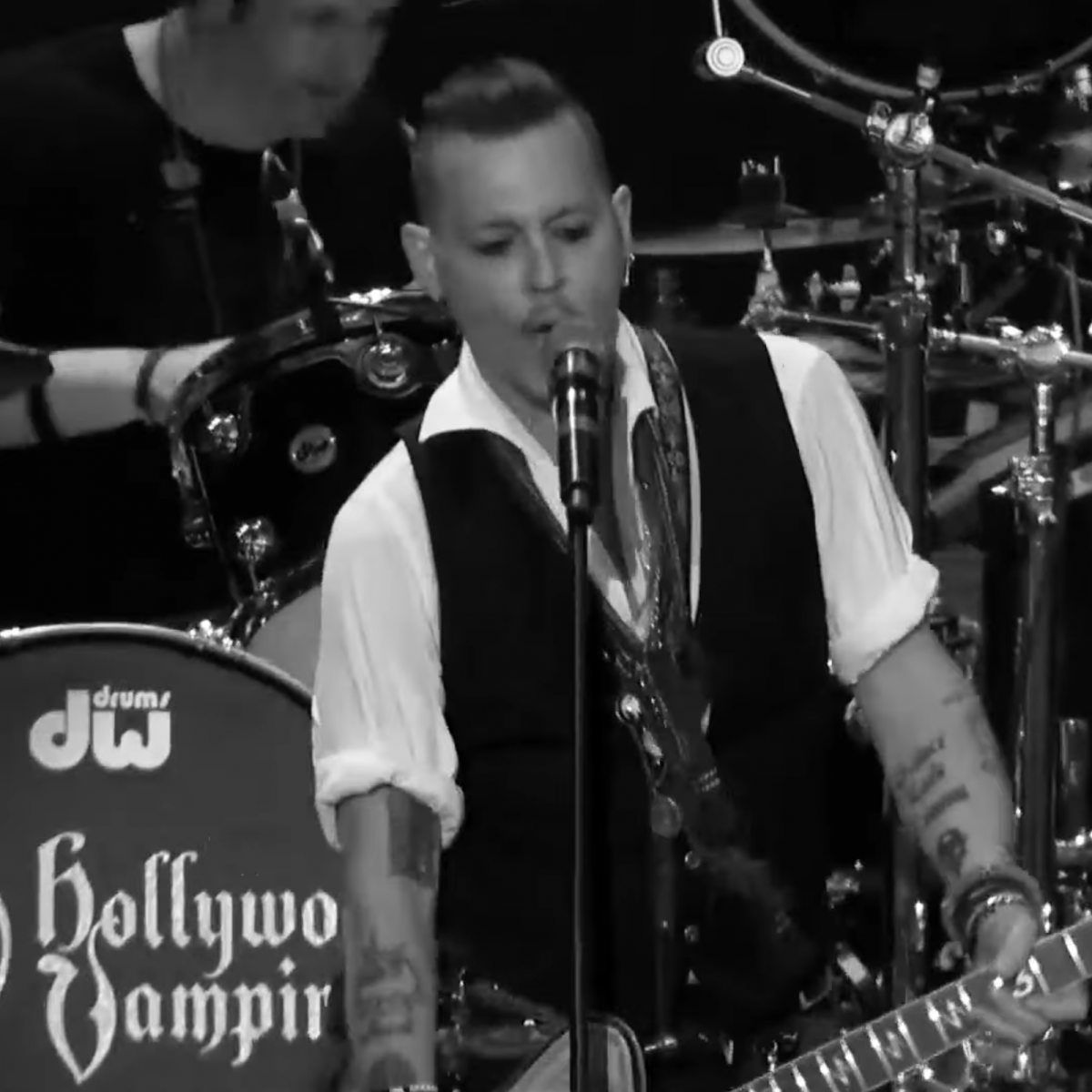 A screen shot of the video “Heroes,” performed  by Johnny Depp and his band “Hollywood Vampires.

When one thinks of John Christopher Depp II, who is known the world over by his stage name Johnny Depp; we automatically think of an incredibly talented and versatile method actor. Depp first rose to fame when he starred in the highly popular television series 21 Jump Street, which was featured on the Fox network from 1987 to 1991. Depp played an extremely young looking undercover cop in the series. This role instantly made him become a teen idol, which made both women and men absolutely swoon with his every move…

But, Johnny Depp wanted to be considered much more than just a teen idol. He went on to be featured in nine films directed by close friend Tim Burton. Some of the most notable ones include: Sleepy Hollow, Edward Scissorhands, Alice in Wonderland and of course, who can forget Sweney Todd Demon Barber of Fleet Street.

Depp gained much critical acclaim and praise for his portrayal of undercover FBI Agent, Joseph D. Pistone in the 1997 movie based on a true story, “Donny Brasco.” The movie also features the legendary actor, Al Pacino. Great supporting actors also include Michael Madsen and Anne Heche.

One of the many memorable, brilliant and funny exchanges between Johnny Depp and Al Pacino in “Donny Brasco.”

In 2012, Depp was written into The Guinness Book of World Records. Why? He is America’s highest-paid actor, with earnings of over $75 million dollars. Depp’s most commercially successful films are the Pirates of the Caribbean Series, which have grossed over $4.5 billion dollars. The method actor based his character Captain Jack Sparrow on The Rolling Stones superstar guitarist and close friend Keith Richards. In 2015, Depp was inducted as a Disney Legend.

Johnny Depp’s numerous awards include the following… He received the Screen Actors Guild Award for Outstanding Actor in a Leading Role for Pirates of the Caribbean: The Curse of the Black Pearl in 2003. He won a Golden Globe Award for Best Actor – Motion Picture Musical or Comedy for Sweeney Todd: The Demon Barber of Fleet Street. Depp is also a three-time Academy Award nominee.

Depp was once part owner of the infamous nightclub, The Viper Room located on the world famous Sunset Strip in West Hollywood, California. It opened in 1993 and the other part owner was Sal Jenco, who starred in 21 Jump Street with Depp. Immediately, this club became a popular hangout for many Hollywood”s most famous “A Listers.”

Unfortunately, it was also the nightclub, where actor River Phoenix died of a drug overdose very early in the morning on Halloween in 1993. In 1995, Australian singer Jason Donovan suffered a drug-induced seizure at the club and survived. The Viper Room has changed ownership multiple times and continues to host music of multiple genres, including metal, punk rock, and alternative rock.

So… What could a man, who is a highly respected, multiple award winning “A List actor. A man, who has more money than one could ever spend in one lifetime. A man, who has dated and married some of the most beautiful women in the world. A man, who is a devoted and loving father still possibly dream of accomplishing next??? Throughout Depp’s entire acting career, he has simultaneously played in numerous bands. However, Depp fulfilled a personal dream when he became a member of the music supergroup Hollywood Vampires.

The band was formed by Johnny Depp, “Shock Rocker,” extraordinaire, Alice Cooper and Aerosmith lead guitarist Joe Perry. The band’s original concept was to honor the memory of legendary musicians, who died too soon from excessive lifestyles in the 1970’s. However, they have covered songs by John Lennon and many other superstar musicians who did not die in the ’70’s…

The band has released one studio album, “Hollywood Vampires.” But… This is about to change very soon! Hollywood Vampires’ first album featured guest appearances by Sir Paul McCartney, Dave Grohl, legendary actor from The Lord of the Rings trilogy, Sir Christopher Lee and many, many other incredible superstars. The. also played a tribute song to Motorhead lead singer and bassist Lemmy Kilmister, when he passed away on December 28, 2015.

Hollywood Vampires first show was at the Roxy Theatre in Los Angeles, California in 2015.The trio was accompanied by original bandmate and bassist for Guns N’ Roses,  Duff McKagan on bass, former drummer for The Cult formed in 1987 and Guns and Roses Matt Sorum, producer, guitarist and co – founder of The Unison Musical Group, Bruce Witkin. At the Hollywood Vampires debut show, Witkin played keyboards.

Also someone, who accompanies the supergroup frequently, is Tommy Henriksen. He has been a bassist, guitarist and songwriter and integral part of Alice Cooper’s band for years. Guest performers have also included Marilyn Manson, original bassist from Black Sabbath Geezer Butler and lead singer from the group and poet from Jane’s Addiction, Perry Farrell. 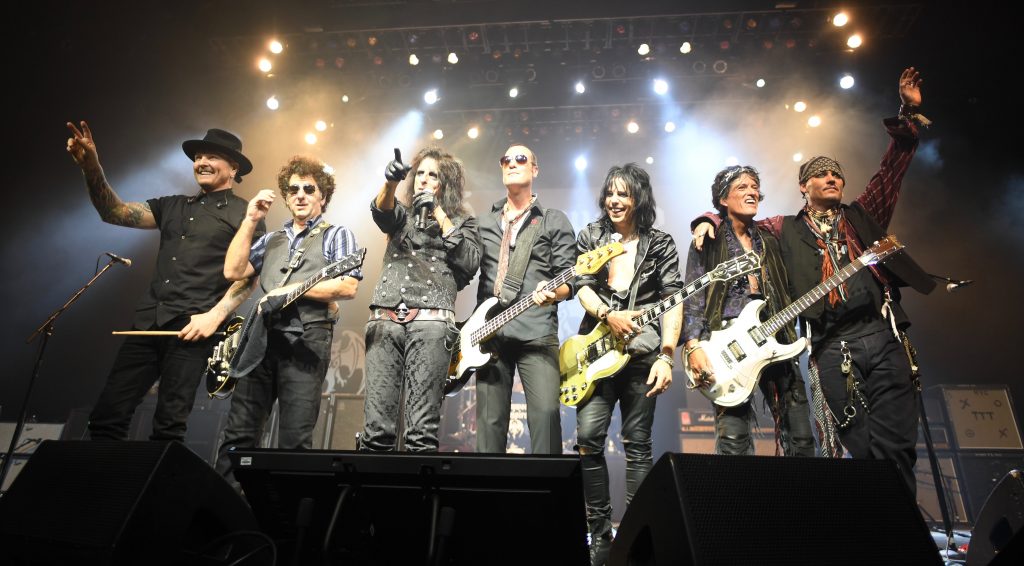 Hollywood Vampires has given us a sneak peak from their second studio album “Rise,” which will be released soon near the end of June this year. In my opinion, expect great things from the album!

Johnny Depp honors the late one of a kind David Bowie as sings “Heroes.” Once again, Depp demonstrates his incredible versatility as an artist and performer. It is eerie just how much Depp sounds like Bowie in the way in which, he sings and approaches covering the song.

I would say that Johnny Depp has fulfilled two dreams since he became an actor. He has always wanted to be regarded as a respected musician. The second dream is he gets to jam and play music with members of his favorite bands that he grew up loving. Can you just imagine doing that? Congratulations to Johnny Depp and the rest of Hollywood Vampires! Their music is fantastic!